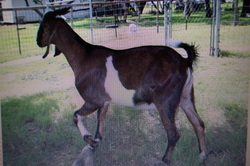 When it comes to goats health.. prevention is better than the cure.. but when a cure is needed, being prepared makes the difference between saving a goats life and him suffering and /or dying…

We sent our young bucks out to green pastors, so when they all got diarrhea, we weren’t surprised or worried. But when Dozers diarrhea didn’t clear up like the others, we worried… After a week of diarrhea Dozer  looked bad. .our healthy stocky boy was reduced to skin and bone…
I researched his symptoms and was convinced he had Goat Polio…but I was too afraid of action…what if I made it worse? We took a fecal sample to our vet to see about worms.. even though his eyes were blood red…Our vet found worm over load, so we treated him with Valbazen…he did not get better..he was worse, Our vet said treat him again with another de wormer…we chose Ivomac plus sub Q but I was still worried…I contacted Goatlady from Goat-link.com ..she agreed that all the symptoms pointed to Polio…and the worm problem was secondary. He was now showing signs of blindness…he needed treatment now...He needed Thiamine…but it was Saturday night by now and nothing was opened…Sunday Morning I rushed to town to a feed supply store and got B complex, but the amount he needed was over whelming….I stayed up at all hours of the night to medicate, feed and water  Dozer…he could not eat… he needed the water lifted to his head…he just wandered then pushed against a corner and moaned with pain…my heart broke for him. The Complex was not working…plus we were treating him with Pen Q for Listeriosis..which have many of  the same symptoms…**﻿we also were giving him Tylan 2oo for pneumonia**﻿..everything was “just in case” we were fighting for his life…Dozer was fighting too….with a fever spike up to 105.8  ..Dozer was not looking good…
Monday morning we purchased the Thiamine and began treatment….it seemed to be helping but new symptoms were appearing…we were not sure we were on the right path…Dozer became weaker, sicker and the diarrhea was getting worse…I was afraid Dozer was dying… I took him to the vet and three vets looked at him…they were puzzled..he was blind..had diarrhea...fever…pain…his gums looked as if he had gotten into acid…they checked his fecal again and now the cocci was taking over..they prescribed Corid and Cydectin..a common treatment, but one I do not use in the treatment of  my goats, I used Sulmet for the cocci  and gave him another shot of Ivomac plus sub Q… I'm sure  my vets didn’t think he would make it…I was beginning to wonder myself.
After a few days, Dozer seemed to be improving… He was eating feed and drinking his electros without my help…but he still could not open his mouth enough to eat hay...we would find him pushing his face into the hay basket but not able to eat. I began rolling the hay into balls and feeding it to him by pushing into his mouth ..he was starving...he wanted to eat…I would sit for 45 minutes several times a day to feed him…I was hopeful…
then one day we saw him…he had his face in the hay basket…he looked like he was eating…i couldn’t believe it. I called his name and he looked at me with a mouthful of hay…the little stinker…how long he was able to eat I don’t know…but he eagerly excepted my hand feeding just an hour before…Now I new he would be ok…Dozer had Goat Polio…in his weaken state… Worms took over him…Cocci took over….this was a complication of him being ill…Dozer had Thiamine treatment for a little over a month before I felt I could weane him off…  Dozer made it…but if I was better informed, better prepared...he would not have had to suffer..
My husband was in the barn when he called me to tell me one of our young does was acting funny…I went out to check on her and sure enough…she was pushing her head in a corner…stretching it back and moaning in pain…I ran into the house...got a shot of Thiamine and gave it to her…within an hour she was fine...back to normal… I continued her treatment for 24 hours… she had goat polio and since I just dealt with Dozer…I knew what to do and it took only an hour for her to be fine… Informed and prepared..

Now we needed to find the source of the goat polio….we had automatic feeder for both the kid does and kid bucks… we also had had a lot of rain and humid weather…and we had Mold in the feed…needless to say we did away with the automatic feeders …Mold causes Goat Polio…but there are other causes as well…..check out Goat-link.com and become informed. Then fill your medicine cabinet with important Medications that can be life saving….Dozer now looks great..…and he is spoiled beyond funny.........

I want to thank Goatlady of goat-link.com  ...she was my rock... 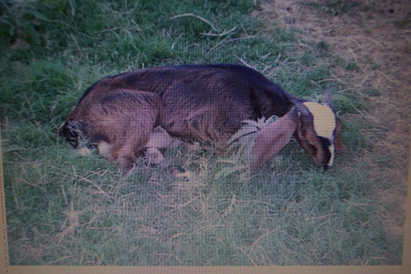 I was so afraid he wasn't going to make it, he was so weak

pushing up against his feeder, grinding his teeth, he was in so much pain 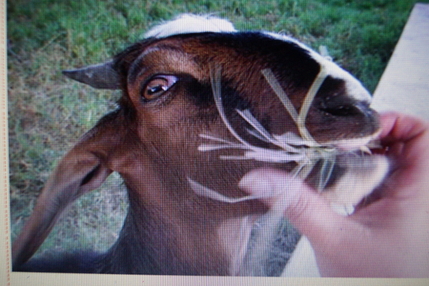 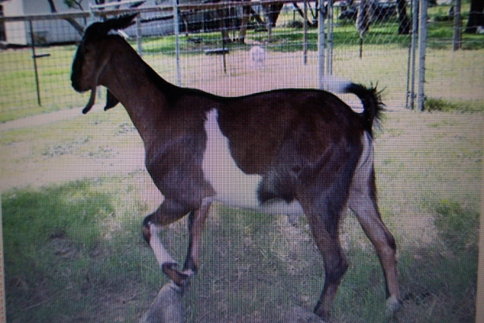 What I know now...2014
Do not  mix Tylan 200 or LA 200 with Pencillin or other antibiotics..
Dont over deworm. In my panic, I gave Valbazen then the next day Ivomec plus...there was no need to do that...give wormer time to work...booster if needed in 10 days.
Always treat both polio and listeriosis, since symptoms are the same.
High doses of Thiamine or Fortified B complex to give 500 mg thiamine every 6 hours
high doses of Penicillin...1 cc per 10# sub Q every 6 hours.
Keep the goat hydrated even if you need to tube or Iv him
Keep the goat fed. If they can not eat/swallow ect...you will need to tube food to them...if they can swallow but not chew...make a slurry out of Alfalfa pellets and water or electrolytes..add milk kiefer or quality yogurt and use a turkey baster to drench the smoothy to the goat...DO NOT USE GRAIN.